Creating a tasting Menu in China

Welcome to the Newport International website and to my Chef’s blog! I have a very unique and incredible job of traveling the country and sometimes the world to develop new and exciting applications for our seafood products. Sometimes this occurs in a corporate office, sometimes in a test kitchen and many of the times in a convention center. The key to my job is to be as prepared as possible yet be ready to change plans as you never know what the day will bring. My trips usually start with me getting off a plane in a new city and using Google maps to find the “best” local market to buy ingredients, hopefully somewhat similar to the items on my punch list for the menu for that day. I would say I usually run about a 75% success rate and the rest has to be improvised on the spot. It can be as simple as not being able to find a good cut of beef for a steak Oscar or not being able to find ripe mangos for a crab & mango ceviche. I try to find fresh local ingredients whenever possible and work our seafood into popular regional recipes that create a familiar yet exciting flavor profile. I remember going out to a big food show a few years ago in the Mid-West planning on making a Maryland Style Crab Bisque as one of the dishes to serve a few thousand visitors at the show. As I was walking the store I came upon some local wild rice and bought every box they had. From there I created a Crab & Wild Rice Chowder and it was a huge hit with everyone as they knew the flavors, however, “had never thought of putting crab with wild rice”.

Most of these experiences are relatively easy in comparison to my most recent trip to Asia in May. I was over with a group from a major Japanese flavor company touring their facilities in Japan and China. After 10 days , 11 flights and 12 cities between Japan and China we were at our brand new state of the art factory in Zhangpu, China. Luckily, I had been to the city earlier in the year and knew there was one grocery store that had a few, very limited, Western ingredients. The plan was to create a 10 course tasting menu for 20 guests from China and Japan featuring our two company’s products the next afternoon. We would be cooking in a makeshift kitchen that we put together in a brand new, never used before, QA lab in one of the buildings. The kitchen consisted of a thermal circulator that was brought from the US, a toaster oven, two induction cook tops and a small propane stove. I had been planning the meal for weeks and the head of US sales for the Japanese company, who is also a good friend, kept asking me what we were going to make. I repeatedly tried to explain that I would know when we went to the market the day before the event and I saw what ingredients we would have to work with. Needless to say, this did not sit too well with him as he is extremely structured, organized and is used to having every detail planned months in advance. He kept listing ingredients that he wanted to use and I continued to say “we will see what they have”. After a frantic trip to the market we had our ingredients and somewhat of a menu. The plan was to incorporate 14 of their products, including a myriad of Asian style flavors, seasonings, sauces and bases in conjunction with our seafood, some local produce, meat & poultry. The menu was done and I drew each dish with colored pencils, highlighting each component, to use for reference the next day.

As I stated before, nothing ever goes to plan and you have to be willing and able to adapt and overcome. The first hurdle came the night before when I got a call in my hotel room, shortly after 1am, that the motor on the thermal circulator had been fried (I guess just because a plug fits in the outlet doesn’t mean it is getting the correct power!) and the pork belly that it was cooking needed to be rethought. The thermal circulator was replaced with a pot of water on a propane stove with a thermapen to try to control the temperature, which was far from easy. It was 2:30pm when we finally got in the kitchen as our morning plant tours and meeting had run a few hours late and we now had 2 hours to put everything together in a kitchen we had never worked in, no pressure. We put our heads down and started prepping as fast as humanly possible. Thankfully I learned that my friend is an excellent sous chef and despite a few panic attacks as anything and everything that could go wrong (Ziploc bags breaking in our makeshift thermal circulator/hot water bath or blowing circuits and trying to find someone who spoke English to try and reset circuits (my 4 word Mandarin vocabulary surprisingly does not include circuit breaker)) we put out the first dish right on time at 430. This is the menu from that day a photo of 8 out of the 10 dishes (I didn’t realize that I was expected to do show plates for a photographer until dish 3 went out!)

Steamed Local Clams in a Broth of Thai Red Curry Base with Coconut, Citrus, Cilantro

Glazed Carrots with Miso Ramen Base and Rice Wine Reduction 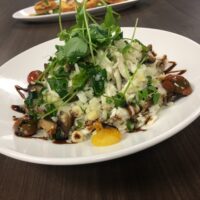 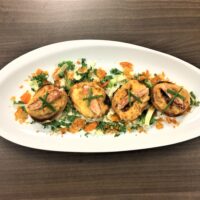